Het Roze Amsterdammetje (The Pink Amsterdam Award) is awarded by the Amsterdam Gay Pride foundation and is being presented to people who play an important role behind the scenes or to those who have put extraordinary amount of effort in the organization of Pride. The pink heart with the stipe and the three crosses of Amsterdam is symbolizing the warm and pink heart that the receiver has for Pride.

Het Roze Amsterdammertje is designed and made by artist René Rikkelman and is being presented to someone who has put their heart and soul into Amsterdam Gay Pride.

On August 4th Het Roze Amsterdammetje was awarded to Pierre Karsten. Since 2013 he is, besides the township of Amsterdam, the biggest sponsor of Pride.

Pierre is driven to be involved in Pride with his heart and soul and is willing to do anything to support us. Pierre explains his commitment like this: “Compared to nationalities, LGBTQI+ people can’t run to their own country for safety when they are discriminated.” There is no gay land. Besides that, he thinks Pride is the most beautiful event in the city and wants to contribute to that personally. 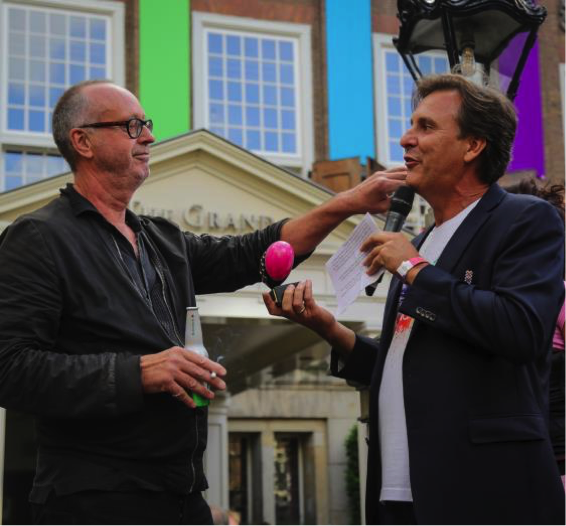